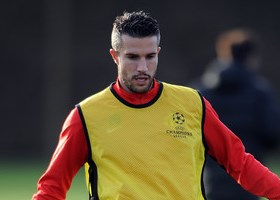 It has been reported that Robin van Persie’s comeback for Manchester United is on ice.

The Dutch international striker was hoping to be back for today’s game with Tottenham.

But manager David Moyes has scrapped all thoughts of playing the striker and explained: “Robin is not quite ready, we don’t think. He is not too far away.”