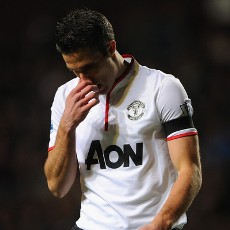 It has been reported that Manchester United striker Robin van Persie has pulled out of the Holland squad for this week’s friendly with Germany.

The former Arsenal skipper got through the entire match as United came from behind to beat Aston Villa 3-2 on Saturday but pulled up with a thigh injury and is now unavailable for the Oranje.