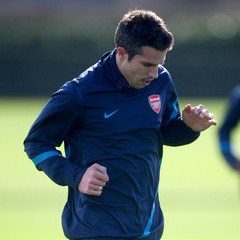 Arsenal captain Robin van Persie feels there may be plenty of goals scored when Manchester City are in London this weekend.

The third-placed Gunners host title pursuers City at the Emirates Stadium on Sunday with Dutch ace van Persie suggesting there could be some attacking prowess on show as both sides strive for maximum points.

“You feel with City at the moment they could either go out and score none or three or five, you just don’t know,” he told the club’s official website.

“It makes it interesting as a fan because we can score five too, we’ve shown that already this season, against big teams. They can do it as well, so it might be 5-5, you never know!

“I’m confident that we can get a good result – we have to get three points, a draw is not that good for either of us. So it should be a great game.

“We are well prepared, because you have to know your stuff about the opposition, but in the end it’s about your own performance that will hopefully make the difference.”