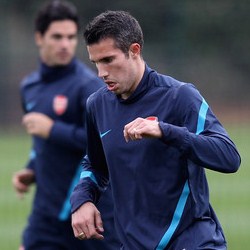 Arsenal captain Robin van Persie has been named the Premier League Player of the Month for October.

The Dutch striker had an outstanding month, scoring seven league goals to take his tally to 10, for which he also received an award as the first player of the season to do so.

van Persie was unaware of such an award as seen by his comments on Twitter this afternoon.

“But I have to slice the trophy in bits because some assists from the boys were [insanely] good! Thanks again mates! Looking forward to tomorrow!”