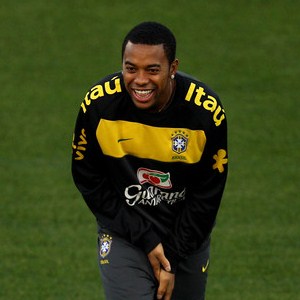 Interesting news are out and it has been reported that Manchester City boss Roberto Mancini is planning talks with record signing Robinho.

The 26-year-old Brazilian international moved to Eastlands from Real Madrid in 2008 for £32.5million, but has yet to settle at the club.

Last season the Brazilian was shipped out on loan back to home club Santos, after falling out of favour with Italian coach Mancini, although he has been placed on the squad list for the upcoming campaign.

Spanish giants Barcelona are reportedly interested in his signature and it had been believed that his career at City was all but over.

But Mancini revealed that talks will shortly be held with the Brazilian.

“He has had the World Cup and other matches but he is on the (squad) list.

“At the moment he is here but we will know more when I have spoken to him next week.”


Santos To Lodge Formal Complaint Against Chelsea Over Neymar Pursuit