It has been reported that Brendan Rodgers was thrilled he failed to bring off Philippe Coutinho late in Liverpool’s eventual 1-0 win over Stoke City on Sunday. 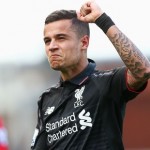 The Reds boss admits he was pondering the substitution of the Brazilian playmaker before he produced a superb 25-yard-plus effort that cannoned into the back of the net, giving his side maximum points at the Britannia Stadium.

However, Rodgers admits it was merely a stroke of luck and not an inspired piece of management which allowed Coutinho to remain on the pitch and fire Liverpool to victory.

“I’m glad I kept him on but I can’t profess to be any sort of genius. It was fortunate he got the goal and he stayed on,” he said.

“It was a great turn and he got away from the midfield player and then a wonderful strike. It was a great strike to win the game.”