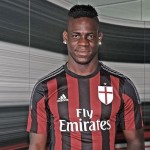 Milan confirmed Balotelli’s season-long loan and the striker has apportioned some of the blame onto Rodgers for his failure to produce at Liverpool.

“I must accept my faults, but the formation chosen by [manager Brendan] Rodgers was not suited to my characteristics,” he told Gazzetta dello Sport.

“At the start I messed up a lot of easy chances, then I had fewer opportunities to score, a bit of bad luck, injuries. It was a mess.

“However I never protested, I accepted the choices of the manager and always behaved like a professional.”

Balotelli has also defended himself against criticism over his professionalism during his time at Liverpool.

He said: “Mario the man hasn’t just appeared at Milanello, at Liverpool as well my attitude and style of life were very normal.

“In the last year there weren’t ever any problems with my private life.

“I could’ve put up a picture on Instagram in a restaurant, but that doesn’t mean I wasn’t training, even though I wasn’t playing.

“I’ve trained a lot, often double sessions and also by myself or in the last few months with Fabio Borini and Jose Enrique.”