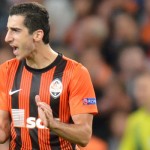 Rodgers is keen to recruit another ‘number ten’ to play behind his strikers, although he is also prioritising a central defender to replace Jamie Carragher when the transfer window reopens.
The 24-year-old Mkhitaryan has caught the attention by impressing Shakhtar Dontesk, but he would cost around £12 million.