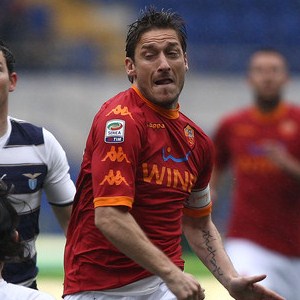 AS Roma bounced back from the disappointment of a midweek Champions League exit to emerge as 2-0 victors in the Rome derby at the Stadio Olimpico.

The evergreen Francesco Totti was Roma’s hero once more as it was his two second half goals that proved to be the difference between the sides in a tense encounter.

After falling behind in the 70th minute, Lazio hit the self destruct button with both Stefan Radu and Cristian Ledesma given their marching orders before Totti secured the bragging rights in Rome with his second from the penalty spot in added time.