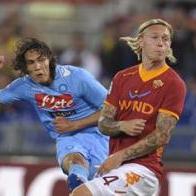 A late goal from Fabio Simplicio gave Roma a share of the spoils in a thrilling 2-2 Serie A draw with Napoli at Stadio Olimpico.

Marquinho had put Roma ahead near the end of a first half the hosts had dominated, during which Fernando Gago missed a sitter at 0-0.

Napoli fought back in the second half, equalising through a wonder-goal from Juan Camilo Zuniga, and going in front thanks to a similarly spectacular strike from the otherwise quiet Edinson Cavani.

With the crowd on their backs and time running out Roma snatched a late equaliser when trickery from Ivorian forward Junior Tallo allowed fellow substitute Simplicio to volley home from close range, the Brazilian midfielder celebrating wildly as he climbed into the stands to kiss his family.

The result keeps Roma in seventh place, four points behind the Champions League places with three matches remaining, while Napoli go third, above Lazio on goal difference, although the Biancocelesti play on Sunday.