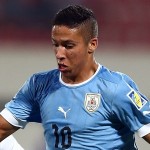 Reports are out claiming that AS Roma are set to sign Penarol striker Kevin Mendez today.

The Uruguay U20 international touched down in Rome yesterday, though insisted he wasn’t sure which club he would be signing with.

However, Roma have clinched a €2 million deal with Penarol ahead of Arsenal, Inter Milan, Barcelona, ??Manchester United for the youngster.

Mendez will be immediately loaned to Perugia for the remainder of the season – with the option of another 18 months. He would then return to Roma battle-hardened from Serie B as a 20 year-old.

The youngster secured his Italian passport in December. I Want To Get Away From Arsenal! – Bendtner