It has been reported that AS Roma chief Walter Sabatini has joined the battle for Stromsgodset midfielder Martin Odegaard. 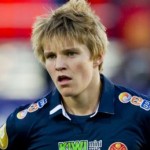 The 15 year-old prospect is already a senior Norway international and visited Manchester United at the end of last season, though no deal was struck.

Tuttosport revealed that the youngster has jumped to the top of Sabatini’s agenda with claims that Stromsgodset won’t stand in his way should he decide to move on in January.

For their part, Odegaard’s family feel his development is best served by staying in Norway.