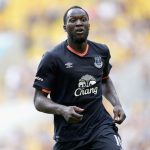 Reports have emerged claiming that Everton are desperate to keep Romelu Lukaku away from Chelsea.

The Daily Mirror is reporting that the Toffees are set to offer the Belgian striker £135,000 per week to remain at Goodison Park for the foreseeable future.

Antonio Conte wants to bring Lukaku to Stamford Bridge this summer and it is understood that the 23-year-old is eager to make the move back to West London, but Chelsea are yet to meet his £75million valuation.

Everton have no plans of offloading Lukaku and will table an improved proposal in a bid to keep him for Ronald Koeman’s first season in charge.