It has been revealed that Manchester United are ready to test Everton’s resolve over Romelu Lukaku. 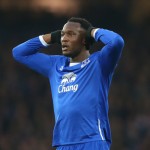 With goals in short supply for United this season, Lukaku is back on their radar – although Everton are certain to resist their advances.

United know they are unlikely to succeed with a bid for Lukaku in this month’s transfer window, with Everton unwilling to let the 22-year-old go.

Although United have played down a bid for Lukaku this month, it is understood they are ready to move for him as part of another huge summer spending spree.