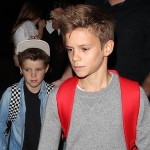 Reports have emerged claiming that Romeo Beckham is turning out for Arsenal’s youth team.

Romeo played against Liverpool this week, Dad, David Beckham making the trip to Merseyside to watch his son feature for the north London side.

The 12-year-old played for the Gunners on Thursday in a match against Liverpool at the Anfield club’s Kirby academy.

Romeo’s older brother, Brooklyn, has been included in Arsenal’s U18 squad in the past week. Marouane Chamakh To Turn Down PSG Offer For Arsenal Stay