It has been reported that Manchester United manager Louis van Gaal has revealed that the duo of Sergio Romero and Antonio Valencia will be fit in time to feature in the match day squad for the Champions League encounter against CSKA Moscow. 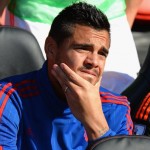 Romero and Valencia had been handed a rest for United’s 3-0 victory over Everton due to their exertions in the South American World Cup qualifiers for Argentina and Ecuador respectively.

Manager van Gaal has now gone on to reveal that the duo have sufficiently recovered and will be in contention to feature against CSKA on Wednesday night.

Van Gaal told MUTV: “It’s the same amount of injuries so Luke Shaw, Paddy McNair and Ashley Young are not going with us. Willo was a little bit ill – Wilson as he is named but, for us, it is Willo – so he shall not travel with us.

“I’ll take 20 players with me. It’s a four-hour flight so, if a player gets ill, I have the other player in my environment.

“Of course that was the reason [Romero and Valencia were absent at Everton]. They have to cope with the jet-lag so I didn’t think it was wise to take them with us against Everton.”


I Can Learn From Schweinsteiger, Carrick – Man Utd’s Herrera