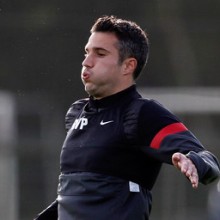 He told talkSPORT: “It was the right choice at the right moment for Van Persie. He had been at Arsenal for a long time and done everything, but didn’t really get the prizes and with Manchester United he has more chance to win silverware.

“It’s great for his career mentally, because he has to prove himself again and that will improve his game.

“I see him as potentially one of the best players in the world and it’s time for him to show it. And with this club he can do it.”