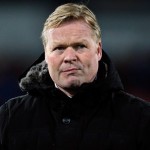 It has been reported that Feyenoord coach Ronald Koeman is keen on the Southampton job.

The Dutch legend’s representative Guido Albers claims that his client is keen on a move to the Premier League after he leaves Feyenoord this summer.

Albers said: “From Ronald’s point of view, it would be amazing. I think it would be a very good success for the club, but also for the Premier League to get a coach like him.

“He is very technical, and very offensive. His team makes goals. They scored more than any other team in Holland this season.

“We haven’t been approached by anybody, but he would like to work in the Premier League.”