It has been reported that Southampton manager Ronald Koeman is not worried about seeing former colleague Louis van Gaal again. 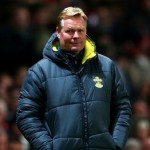 The Dutch pair had a falling out when Koeman was manager at Ajax about ten years ago with Manchester United boss van Gaal reportedly making working conditions difficult when he was director of football.

Ahead of Southampton’s home meeting with United on Monday night, Koeman spoke of his ailing relationship with van Gaal but said it was certainly not a topic of discussion for the public.

“It is no issue. If we see each other, we shake hands. And that’s enough,” Koeman said.

“The game is Southampton v Manchester United, and the game needs that attention.

“It is not about Ronald Koeman and Louis van Gaal. That is private. That was a working problem…it is not an issue, it is eight, nine years ago and now I prefer to talk about the game.”

Koeman’s Saints have dropped off in recent weeks with a draw and two losses seeing them fall ten points behind league leaders Chelsea while van Gaal’s United have strung together four wins to cement themselves in fourth place.