Reports are out claiming that Barcelona legend Ronaldinho has spoken of how close he came to signing for Sir Alex Ferguson’s Manchester United. 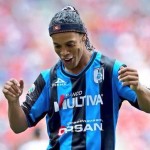 The 34 year old former Brazilian international was heavily linked with a move to Old Trafford in the summer of 2003 before he moved to Barca.

He said: “A good friend of mine who was running to be on the Barcelona board, Sandro Rosell, had asked me if I’d play for Barcelona when they won the election and I told him that I would.

“I was on the brink of joining Manchester United, there were just a few details to iron out, but Rosell called me at the last minute to tell me that they were going to win the election.

“That made everything happen very fast.”