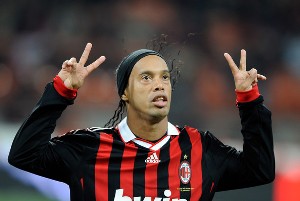 AC Milan midfielder Ronaldinho has revealed that he is determined to make Brazil’s 2010 World Cup squad.

The former Ballon d’Or winner has lost his place in the Selecao after a dip in form at firstly Barcelona and then Milan.

However, the flamboyant midfielder told reporters that the year which is about to end has been a positive for himself and for AC Milan but believes that 2010 will be even better.

He added that it is true that he hopes to go to the World Cup in South Africa, but he does not want to get there because of the things he say.

Ronaldinho then said that he wants to prove with his footballing ability that he deserves a spot in the Brazil squad.