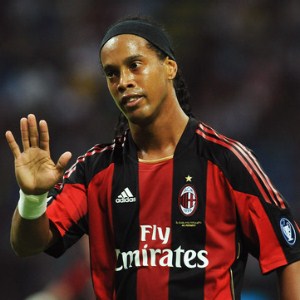 Interesting news are out and it has been reported that Brazilian midfielder Ronaldinho is determined to drive a hard bargain in new contract talks with AC Milan.

It is believed that AC Milan want the former Barcelona star to take a major cut on his €8 million salary, potentially as much as 50 per cent with a €4 million-a-year offer mooted.

However with Zlatan Ibrahimovic and Robinho arriving on big wages, Ronie doesn’t feel inferior to either player and will have his brother and agent, Roberto de Assis, demand parity.