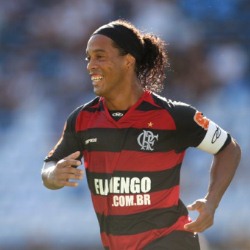 Ronaldinho has revealed his intention to become a permanent fixture of the Brazil squad again, insisting he can “make a positive contribution to the national team”.

The Flamengo playmaker, now age 31, was omitted from former coach Dunga’s 2010 World Cup squad after a season in which he failed to demonstrate his form and fitness on a regular basis with AC Milan.

However the two-time World Player of the Year was given hope of reigniting his international career by current Selecao boss Mano Menezes when he was selected for a friendly against Argentina last November and despite not featuring since, Ronaldinho believes he still has plenty to offer at the highest level.

Ronaldinho said : “My objective is to do my best with Flamengo and if the coach needs me I will be ready,”.

“It’s the moment I’ve been dreaming of (to return to the Brazil squad). Physically, I’m in top form.

“From now until the World Cup a lot of things can happen, but I believe I can make a positive contribution to the national team.”

Flamengo Ready To Snap Up AS Roma Striker Adriano