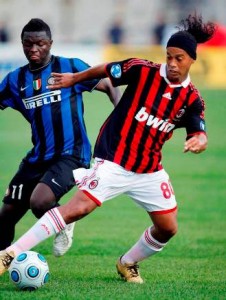 AC Milan coach Leonardo has admitted that he has dilemma of whether to give Ronaldinho another chance to find his old form with a starting place in stuttering Milan’s home match against Bologna on Sunday.

The playmaker was inspirational in mid-table Milan’s opening-day victory at Siena but was then ineffective in the 4-0 derby defeat by Inter and in last weekend’s goalless draw at Livorno.

It is now believed that Leonardo may be tempted to use Dutch veteran Clarence Seedorf, who set up Filippo Inzaghi’s double in Tuesday’s 2-1 Champions League win at Olympique Marseille.

However dropping Ronaldinho again after he was regularly sidelined by former boss Carlo Ancelotti last season risks crushing the Brazilian’s confidence as he could read it as a definitive thumbs down.