Ronaldo and Mourinho in Furious Bust-Up! 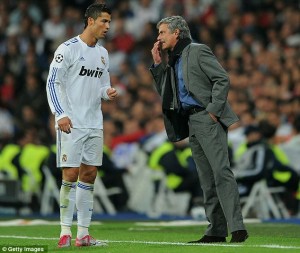 Cristiano Ronaldo and Mourinho were involved in a furious bust-up in the locker room after their win against Valencia in the Copa del Rey.

The former Manchester United star felt Mourinho had crossed the line during the game, but Mourinho was having none of it and continued to criticise the Portuguese for coughing up possession too easily.

The row threatened to spill over until the intervention of teammates and Perez, who could hear the exchange from outside the home dressing room.