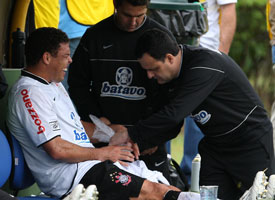 A hat-trick by Obina gave Palmeiras a 3-0 win in their Sao Paulo derby on Sunday against Corinthians, who lost Ronaldo with a suspected broken hand.

Ronaldo, who fell badly on his left arm, had to leave the field after 20 minutes and Corinthians doctor Paulo de Faria said he had “a suspected fracture of the hand, he hurts a lot and cannot play.”

The three-times FIFA Player of the Year will undergo tests on the injury on Monday. Tottenham In Talks With Corinthians For Alexandre Pato