Real Madrid forward Cristiano Ronaldo claims Barcelona get a lot of ‘outside help’ and has accused Javier Mascherano of ‘cheating’. 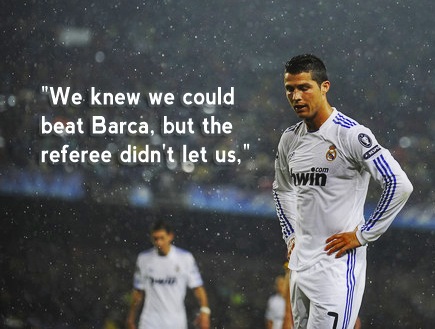 The Portuguese winger was left in a foul mood following Real’s UEFA Champions League exit at the hands of Barca on Tuesday night.

A 1-1 draw at Camp Nou was not enough for Jose Mourinho’s men, as they crashed out of Europe’s premier club competition 3-1 on aggregate.

A 2-0 defeat in the first leg of an eagerly-anticipated continental clash proved to be Real’s undoing, with the fall out from a fiery encounter at Santiago Bernabeu still ongoing.

“We knew we could beat Barca, but the referee didn’t let us,” Ronaldo, who became the world’s most expensive player when he joined Real from United at the end of the 2008/09 season, told reporters.

“Once again it was the referee that didn’t allow us to dictate the outcome,” he added.

“The referee in the first match (Wolfgang Stark) took away our chances of playing the final. Whoever knows anything about football knows that Barcelona get preferential treatment.”

Real were furious that striker Gonzalo Higuain had what they felt was a legitimate goal disallowed by referee Frank De Bleeckere shortly after halftime with the score tied at 0-0.

De Bleeckere ruled that Ronaldo had fouled Barca’s former Liverpool midfielder Javier Mascherano, who was playing in central defence on Tuesday, shortly before Higuain curled the ball past Victor Valdes into the net.

“Higuain’s goal was good,” said Ronaldo, who scored the winner in a 1-0 victory over Barca in the King’s Cup (Copa del Rey) final last month.

“(Gerard) Pique pushed me and I landed on Mascherano. He didn’t used to fall to the ground in England, but he’s picked up the bad habit of doing it here like everyone else.” Real Madrid Strike Terms With AS Monaco For James Rodriguez