The Arsenal boss has offered his thoughts on the future of the Portuguese attacker, suggesting that the French capital would be a likely destination if los Blancos let him leave 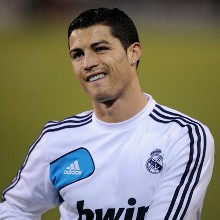 Arsene Wenger believes that Cristiano Ronaldo could go to Paris Saint-Germain should he decide to leave Real Madrid.

Rumours have suggested that the Portuguese is unhappy at the Santiago Bernabeu and might elect not to extend his deal with the club beyond 2015.

PSG have been heavily linked with the player, and Wenger is certain that he could be on his way to the French capital if his days in Madrid are indeed numbered.

“You do not leave Real Madrid if Real Madrid do not want you to leave,” the 63-year-old told Telefoot.

“But I am sure of one thing. PSG would be in line for Cristiano Ronaldo.”

Meanwhile, former Portugal forward Pauleta, who represented the Parisians between 2003 and 2008, also believes his compatriot could be in line for a move to the Parc des Princes.

“PSG have the capacity to buy him and a great sporting director in Leonado, who is a phenomenon with great knowledge, so why not?”