Reports are out claiming that Wayne Rooney believes Manchester United missed a golden opportunity against Aston Villa on Saturday. 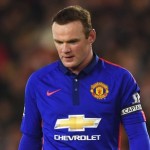 The Red Devils were held to a 1-1 draw at Villa Park after Radamel Falcao cancelled out Christian Benteke’s 18th-minute opener with a response eight minutes into the second half.

Villa lost Gabby Agbonlahor to a questionable red card in the 65th minute which prompted Paul Lambert to sit men behind the ball in search of a draw which Rooney felt made life tricky for he and his teammates who were after seven wins on the trot.

“I thought we were the better team and their goal came against the run of play. We came out for the second half knowing that we had to push for an early goal, and managed to do that.

“When they went down to ten men, they put more bodies behind the ball which made it a bit more difficult, but perhaps our final pass or cross wasn’t there.

“They knew that after the red card they would have to defend with men behind the ball, and sometimes it can be difficult. It was frustrating, their goal came from a free-kick and deflected into the top corner, but these things happen. We had to lift ourselves and we did well to get the goal after the break, we just couldn’t find a second.

“We were pushing them and we had good possession, but just couldn’t get a breakthrough. We’re paying the price for that now. It’s important not to lose the game, but we thought we’d done enough to win.

“We should have got three points, so we’re a bit disappointed and frustrated.”

The draw kept United in third position but saw them fall seven points behind league leaders Chelsea and crosstown rivals Manchester City who are equal in 39 following City’s 3-0 win over Crystal Palace.