It has been reported that Manchester United captain Wayne Rooney admits Spanish is now the dominant language inside the locker room. 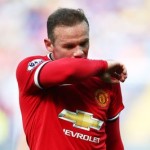 The England international has joked that English is now a secondary language in the Manchester United dressing room, with everyone now speaking Spanish.

He told Sky Sports: “You get in the dressing room and everyone’s speaking Spanish! English is getting pushed aside a bit.

“All the senior players are helping the new lads settle in too and there’s a lot of foreign players so they can help each other too.

“The manager makes sure the players are speaking English as well and the club make sure things are put in place for them to adapt to life in England.”