It has been reported that Wayne Rooney has thanked his Manchester United teammates for holding on for a narrow win against West Ham United on Saturday. 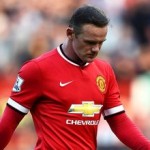 The Red Devils skipper, who opened the scoring in just the fifth minute in the eventual 2-1 victory at Old Trafford, was sent off for a rash challenge just before the hour-mark.

The England international striker agrees it was the right decision by referee Lee Mason to show him a straight red when he cut down Stewart Downing from behind and has apologised for his actions while thanking his United mates for getting over the line.

“No. I understand it (the punishment),” said Rooney when asked if he would appeal the three-match sanction for a straight red.

“I knew at the time that I misjudged it. It is a red card and I don’t think it will benefit anyone to appeal against the decision.

“It was probably the right decision. I saw the West Ham player making a counter-attack and I tried to break-up the play, but I just misjudged it.

“I think everyone knew (I was in the wrong), so I am just grateful that the lads were able to hold on.”