Wayne Rooney has admitted that he will have to prove himself to new Manchester United manager Louis van Gaal. 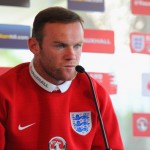 The 28-year-old scored 19 goals, but he concedes his place in the team will come under threat unless he impresses the new boss, who has a transfer kitty of over £150million to spend.

“When a new manager comes in, you always feel you have to prove yourself over again,” Rooney said.

“You don’t know what ideas he has got or how he wants to play. I have not met him yet.

“So when we’ve finished the World Cup and when we go back into training, it will be like a new start and you’ve got to prove yourself again to make sure the manager picks you.”

Rooney is pleased with Van Gaal’s appointment, and the Dutchman’s decision to name Ryan Giggs as his assistant.

“I think it is a great appointment,” Rooney said at England’s World Cup training camp in the Algarve.

“I think everybody knew for the last few weeks that Louis van Gaal was going to take over and the record he has got around European football is fantastic.

“He has won a lot of major trophies and it is great that it is sorted out now.

“It is obviously great that Ryan has stayed with him as his number two. It is exciting and it is going to be an exciting time at the club.”