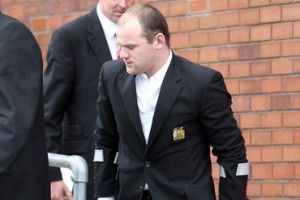 Interesting news are out and it has been reported that Wayne Rooney is being tipped to make Manchester United’s bench for tonight’s clash with Bayern Munich.

Local newspapers have reported that England international Rooney could yet make a dramatic appearance tonight in a bid to save Manchester United’s season.

Sir Alex Ferguson left the door open for his 34-goal talisman when he said: “I don’t think he’ll be on the bench – but he might try to persuade me and talk me into it. It’s a difficult one.”

Rooney, who struck in the first minute in Munich, will be desperate to play a part tonight.

The England star, who was wearing a protective boot up until the weekend, drove himself to training yesterday.

But Ferguson insisted there will be no gamble on the player who means so much to United and to England at this summer’s World Cup.