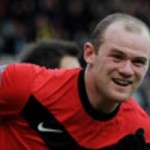 Sir Alex Ferguson has revealed that Wayne Rooney is on course to return for the Manchester derby – and laughed off claims that Real Madrid are set to swoop for his star man.

Rooney was linked with a £90 million move to Real in this morning’s papers.

But Ferguson was quick to brush off such talk.

“It is the silly season isn’t it,” said the United boss. “It always happens at the end of the season. Wayne Rooney will still be here next year.”