It has been reported that Everton midfielder Ross Barkley had no problem with pre-World Cup criticism from England coach Roy Hodgson. 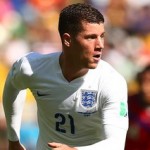 Hodgson sought to ease the expectations around Barkley after his performance in a friendly against Ecuador.

“I took that on board,” Barkley said of that criticism.

“Obviously I’m a young lad and I’m going to make mistakes but I’ll learn from them and I know it’s costly making mistakes.

“Hopefully I’ve learned from it at the tournament and can take that into the new season and it will make me a better.

“Roy’s someone who you can talk to and you could see out on the pitch he has given us young lads the confidence to do well.”