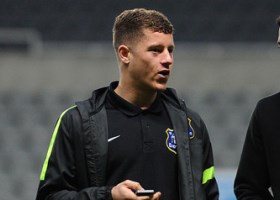 The 20 year old England international has had an outstanding breakthrough season for Roberto Martinez’s side and could be included in England’s World Cup squad.

The Frenchman said : “He’s made a big step forward; from a young hope he has suddenly convinced everybody he has huge potential and talent,”.

“He can have a huge impact in big games, with a combination of technical qualities and power, which are very difficult to combine in midfield and what is demanded from a modern midfielder. For me, he has had a big impact this season. He’s one of the best I have seen.

“It’s good that he’s not guaranteed a World Cup place, because at the World Cup experience of big games is important in terms of the number of games you have behind you.”