It has been reported that England coach Roy Hodgson has decided to go with Arsenal midfielder Alex Oxlade-Chamberlain for his final World Cup squad. 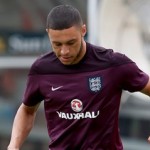 Liverpool defender Jon Flanagan and Everton’s John Stones have now left after spending the last three weeks with the squad.

The standby duo have been told they could be called up at any time though if Oxlade-Chamberlain does not demonstrate sufficient progress in his recovery from the injury to his right knee.

Hodgson has until Friday to decide whether he will replace Oxlade-Chamberlain, and for now he is positive about the midfielder’s chances of playing some part in the tournament.

“That is what we are hoping for,” he said.

“But there are still a few assessments to be made on him so I wouldn’t want to suggest that is a stone-wall certainty.”