England coach Roy Hodgson has admitted that he would like to see Wayne Rooney settle his Manchester United future. 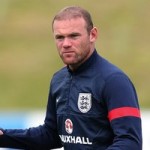 Recent reports suggest that the Premier League champions have rejected two bids from Chelsea, and the player’s future remains the subject of speculation.

Hodgson said : “It would be very nice if (his future is clarified) both for him and his club, and of course my hope and desire is that will happen,”.

“In my year and a bit as national team manager I’ve been faced with the situation where players are not necessarily always playing in their team, but because they have the qualities we’re looking for, they still manage to be selected.

“I’m hoping that will be the case with Wayne, but I’m not prepared to make any statements that if he’s not playing for a club side he can’t be considered for England.”