It has been reported that Manchester United legend Roy Keane has wrote off their title chances this season. 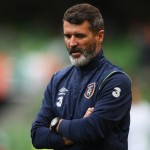 Keane has slammed the culture now at Old Trafford.

“United have gone away from what they were about,” he said.

“They are a bit like the late 80s, buying a lot of players, thinking they will gel.

“But it doesn’t happen that quickly, although they will definitely be stronger this year.

“Louis van Gaal has had a full pre-season this year, they’ve looked good – from what I’ve seen – but then they had a good pre-season last year, too.”

Reloading, Keane added: “However, I don’t think United’s spine is strong enough. I still think they need a centre-half.

“United will be better and they will need to be stronger out of the blocks, but if I was a betting man – which I’m not – I’d still go with Chelsea.”