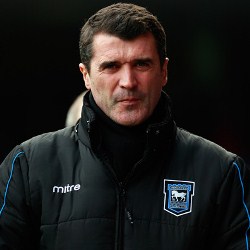 Keane told The Sun: “You really have to take notice of City.

“I don’t think the current City group see United as a machine that can’t be stopped.

“Beating United at Wembley was a milestone for them.

“They’ve been close to getting results over United in the last few years — particularly when Sven Goran Eriksson was there and they did the double over United for the first time in a long time.

“But now you really have to take notice of City.

“When a team is spending that sort of money and bringing in the quality they have then they are a threat.

“City were very much a roller-coaster club but Roberto Mancini has done a good job.”

Keane admitted: “It’s all well and good having money but Mancini has brought established internationals – quality players who can handle the big occasions.

“When I was at United it was always about keeping them down there but they’re creeping up now.”