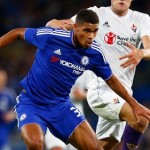 Reports are out claiming that Chelsea boss Jose Mourinho says he’d have no problem playing Ruben Loftus-Cheek against Arsenal.

Mourinho utilised Loftus-Cheek in the Blues’ 4-0 Champions League win over Maccabi Tel Aviv after resting Nemanja Matic at Stamford Bridge on Wednesday and, despite an early yellow card, the midfielder shone in the middle of the park.

When asked whether the clash with Arsenal was too big of a game for the 19-year-old, Mourinho said: “I don’t think it is. I played many times 18, 19 to be fair. When I play these guys many of them their first match was a big one.

“The first match for [Raphael] Varane was a Champions League match against Man City – he was 18 years old. For [Davide] Santon it was against Roma, he was 17.

“Ruben is ready. My work on Ruben is not to be mentally ready at the confidence level. He is very confident. He has very good self-esteem, he wants to play and is not afraid of anything.

“But with Ruben the process is on the tactical side and the physical side. For example to play the way he did the other night in minute 70 something he had cramps. Physically and tactically he is not ready, mentally he is ready.

“I play him tomorrow for him no problem.”