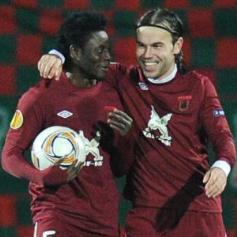 Tottenham’s second string failed to deliver the performance ailing manager Harry Redknapp would have wanted as they were easily beaten 1-0 by Rubin Kazan in their Europa League Group A game in Russia.

Sebastien Bassong needlessly gave away a free-kick on the edge of the box 10 minutes after half-time and Bebras Natcho took full advantage by clipping the set-piece over the wall and past Carlo Cudicini.

Had it not been for a number of excellent saves from Cudicini, the scoreline could have been much worse and Spurs did not register a shot on target throughout the match.

Despite having internationals William Gallas, Jermain Defoe and Roman Pavlyuchenko among their ranks, Spurs were sloppy throughout and even the most simple of tasks eluded them at times, in contrast to their previous strong performances in the competition.

With a home game against PAOK Salonika and trip to Dublin to face Shamrock Rovers coming up, Redknapp still should be confident of leading his team through to the last 32 when he returns to action following his lay-off.