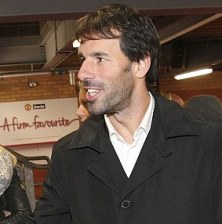 Although United have gone behind in 13 of their 20 games in all competitions this season, the United legend backed his old club to reclaim the title they lost on goal difference to Manchester City on the final day last term.

“It looks like a solid team,” he told the Mirror.

“Even last season they took it right to the end and they’ve started off this season just as well. It’s very stable.

“They are past the group phases of the Champions League and right up there in the Premier League, so it looks like getting even better for them.”