It has been reported that Dundee United starlet Ryan Gauld is not looking to leave the club anytime soon.

The 17-year old attacking midfielder is attracting close attention from Arsenal as well as being linked with Manchester United and Real Madrid. 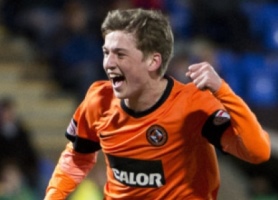 The talented youngster, already labelled as ‘Mini Messi’, is looking to continue his development at Tannadice before he contemplates leaving for a big club in the UK or in Europe.

“At the moment I think I need to stay at Dundee United to progress,” he told the Daily Record.

“To be the best I can be, I need to be playing first-team games.

“Playing abroad would be the best culture of football for me to play in.

“If English Premier League clubs came calling now I would have to think what’s best for me four or five years down the line.

“If I was to go down there I would have to seriously consider what my chances were of playing first-team football and if I was stuck in the reserves would I enjoy that?

“I can’t just think that it is a big English club and I should jump at the chance to sign for them.

“I would really need to sit down and weigh it all up and think about what’s best for me in the long term.”