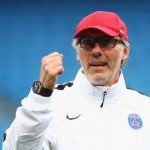 The Sun reorted that there has been a recent wave of support within the Old Trafford boardroom for the Paris Saint-Germain boss and former United centre back.

United directors fear Jose Mourinho would bring all his own men in and jettison Ryan Giggs.

Blanc, however, would work with United’s most decorated player.

The long term plan is still for Giggs to be the boss in the future and the club does not want to lose him now.

It is not certain that Mourinho has lost out and he has a verbal agreement to take charge of the club in the summer.

There is even a three-year £60million contract drawn up ready.

But the news that there has been more wobbling inside Old Trafford will worry him.