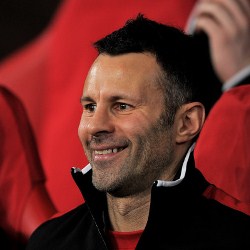 The celebrations showed just what it meant to everybody connected with the club and Manchester City’s lead at the Barclays Premier League summit is now cut back to two points.

“”I think it’s team spirit,” replied Giggs when asked by MUTV how United continually manage to conjure up late drama.

“Knowing we are going to create chances late on.”

“Probably today was frustrating as we created more chances in the last eight minutes or so than we did in the whole game. That’s probably frustrating for the fans and the manager but credit to the lads as well. We kept going when our heads could have quite easily gone down. Norwich put us under a lot of pressure but we kept going and got the goal.

“It was a mixture of things really. Do Norwich stick or twist? Do they try and defend the draw or go for it? Obviously, we always go for the win and we’ve got players on the park who can score and create goals. Ashley [Young] came onto the pitch and put in some great crosses, obviously like the one or my goal, so we’ve got goals from all areas.” Javier Hernandez Determined To Put Dismal Season Behind Him