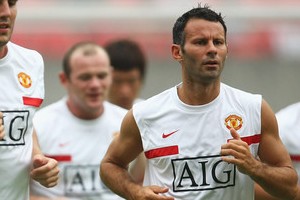 Ryan Giggs however will be missing due to a fractured arm.

Giggs added that there were a couple of chances to meet when Beckham was at Real Madrid but it is great that it will finally happen and great for Beckham to come back.

Giggs also said that he hopes Beckham does not do anything nasty to Manchester United as he is a quality player and has always risen to the occasion.

Giggs added that with the right foot Beckham has he can just ping balls 50 yards or make a five or 10-yard pass and that he has amazing accuracy.

The veteran winger also said that Manchester United must try not to give free-kicks away from 25 or 30 yards out because Beckham is capable of putting them into the top corner.

Giggs ended by saying that hopefully David Beckham will enjoy the occasion but not that much.