It has been reported that Stoke City captain Ryan Shawcross has warned Arsenal – ‘Potters fans do not like you!’. 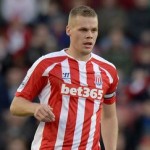 The 27 year-old defender believes Arsene Wenger’ side could struggle against Stoke, who have only lost in the seven times this fixture has been played since 2008.

Shawcross said: “The pressure is building for us to get some points, but it’s Arsenal at home and our record is very good against them at the Brit.

“The fans dislike Arsenal so it’s going to be a tasty game. Hopefully the atmosphere will be buzzing and we can get three points.

“If we play like we did at Manchester United or even better we can beat Arsenal.

“We’ve played well against the big teams and hopefully we can make the Britannia a fortress again.”