Reports are out claiming that Bacary Sagna believes Manchester City were too respectful of their opponents last night. 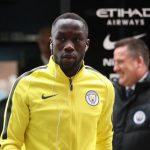 City were beaten 3-1 by AS Monaco in the Champions League Round of 16 second leg at the Stade Louis II to crash out of the competition on away goals after it ended 6-6 on aggregate.

Monaco scored twice in the first half through Kylian Mbappe and Fabinho, before City responded in the second half through Leroy Sane.

But a 77th-minute header from Tiemoue Bakayoko settled the two-legged tie much to the frustration of City full-bak Sagna.

“We gave them too much respect. Against these kind of players, we out ourselves in danger.”

Asked what was said at half-time, Sagna responded: “(That) we couln;t keep going this way.

“At half-time we were out so we had to go on the front step and we had to give (them) a problem, and we changed the system.

I think it worked quite well. We managed to create more chances but unfortunately we didn’t score.

“It’s never easy but we have to take it unfortunately.

“We have to say congratulations because they are through tonight, and we are out and we have to recover.”

“Because on Sunday we have an important game.”


We Are In Manchester To Make History! – FC Rostov Boss Ivan Daniliants