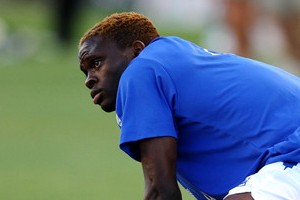 Everton striker Louis Saha has said that he is not getting carried away with his return to the France squad.

Saha’s three-year exile from international football ended yesterday when he was named in the squad to face Spain.

The Everton hitman, now age 31, has bounced back from a horror run of injuries to net 15 goals this term.

However Saha said that it is good to be in the list and that he is really happy but after that you have to prove yourself and finally, you have to stay.

The former Manchester Untied striker said that before thinking about the national team, he thought above all about playing again, because he was missing the pitch and all he wanted was to make it fun again.

He added that he is happy but also said that he went through too many tests to get as carried away as he did in the past.

Saha then ended by saying that being called up once again is still great.